You may not have noticed if you don’t pay attention, but top dad and Aphex Twin Richard D James has an album about to drop.

We’ve been watching with interest the slightly ludicrous publicity campaign, which has involved a blimp and information being released on the dark web.

And now he’s come out from behind his scary mask to do a phone interview for Rolling Stone. And it’s a really good interview. As always you wonder how many of his answers are just made up, but we surmise not that many.

It turns out he’s battling with the same shite as all of us – namely trying to find time to do techno stuff around screaming children and school runs. And why wouldn’t he be ?

And he’s living in a wee village near Glasgow. 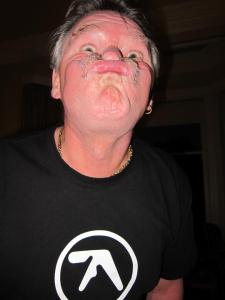 An Aphex Twin official gurner we met in a hotel yesterday