I’ve been a fan of Wevie Stonder since the first release Eat Your Own Ears on Skam back in 2000. I still have an A4 insert from that LP up on my wall featuring a chihuahua and a story about an Indian man who never cut his nails. It only cost half the price of a normal album, I was impressed by that. Also when my mate bought a T shirt, they sent him a one off limited edition arse print.

50% of them have children, so that means they win some sort of prize. They’ve had a number of albums out over the years, all with moments of genius interspersed with utter drivel. Next on the cards is a solo album from Mr Vast. Mr Vast promised to dedicate a rave tune on it to Techno Dads, which made me cry.

If you live on a planet where shit music is the best, then this is the shittest of the best.

TECHNO DAD: Hello Wevie. Welcome. What tunes are most likely to get the Wevies up dad dancing ?

THE VICE PRESIDENT: balkan brass, james bond tracks, pink panther theme and a bit of napalm jazz here and there.
but then anything goes really, depends on the volume i guess….

ADMIRAL UMNEY: I can only dance to Mariachi band music? Dunno why? Maybe it’s the Mayan obsession again?

TD: Tell me about the Wevie writing process. I imagine lot of giggling and beer.

MR VAST: I Think Vodka is usually the thing that gets the job done. though the cumulative effect of everything else we´ve had for the last 20 years also saves time and money these days…in fact the current project , Mr Vasts solo album, involves mainly ´using´ new wool for inspiration- pure as feck.

AL: It’s the audio equivalent of scrap heap challenge but with monkeys as contestants / an extreme form of (inescapable) music therapy / the aural proof of the heisenberg uncertainty principle. And it takes months and sometimes years to get right.
A kind of cross between the kind of excitement you have when you’re a kid when you laugh so hard your head goes a bit wonky, and a deeply disruptive ongoing unavoidable curse. Everything I do to try to stop doing it only makes it worse. And now there’s Harry Vast’s “Solo” project which is taking even more of my time per track than stonder… and is much much worse. It is a curse.

TD: Is there likely to be another Wevie album? It must be quite hard keeping the cack momentum up, it’s not like you can just bang out some beats…

THE VICE PRESIDENT: we could knock out an album every week i suppose. but what for? It takes on average 2 and a half to 3 years to make a Wevie record so if we were to start next week we are looking at 2014 earliest for the next one. Unless the Mayans were right and then if any of us survive the apocalypse I guess we’ll be too preoccupied with avoiding cannibals to write Cack.

MR VAST: well like i mentioned in previous answer, The Mr Vast thing is whats going on right now, should be ready this year- single hopefully arsing round youtube and the general net in the spring….

AL: Yeah there will be a stonder ‘best’ of comp out in the summer, and possibly a film of someone drawing a horse. A proper new album will happen soon after that.. and I don’t mean vast..

TD: Your stage show was quite complicated when I saw you live in Glasgow some years ago. Complicated and scary. The bollard tune inspired some serious dad dancing. How did you come up with the show, did you lock yourselves in a garage with some nitrous oxide?

THE VICE PRESIDENT: we just copy the audience basically, so i bounce that question back to you. 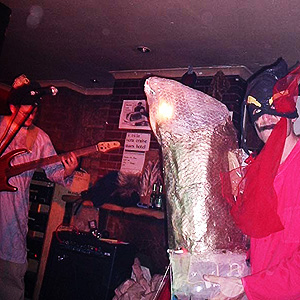 MR VAST: Before every show theres usually some loose planning, or at least i will scavenge around to find some new ´props´from wherever we are, the most preperation we ever had was the Cock Hat a life size 1metre dong that was erected on a bike helmet and fitted with disco lights,pump-action supersoaker and furry dice. Sadly one tour ,it got stuck on a swiss mountain pass and was never seen again.Probably for the best since one austrian girl lost the use of her left eye by taking a fully pressurised piss jet at pointblank range.

AL: It’s quite a simple formula really – I play the tracks I made in the studio whilst everyone pretends to play instruments over the top and wear the worst outfit they can find after drinking heavily.

ADMIRAL UMNEY: We never rehearse so whatever comes down the pipe is real. If it’s sometimes shit them’s the chances you take.

TD: In your BBC Radio 3 Mixing It session a few years ago you said ‘I’ve seen your arse’. I’ve checked, and that is the first time anyone has uttered those words on the BBC. What was it like bringing the Wevie roadshow into a BBC studio, and how did it come about?

THE VICE PRESIDENT: i remember some good arses at the bbc. really nice arses man.

MR VAST: We did Breezeblock session for radio one and they were daft enough to get us back in for mixing it, I remember sticking a plastic donkey in a black nylon stocking and twatting their kettle drums…havent been invited back since…hmmmmm. having said that i would quite fancy doing a bit for the freak zone on 6 music, just in case stuart marconies reading this….

AL: It was highly enjoyable and embarrassing in equal measures. The best bit about it for me was telling my grandparents to listen to radio 3 as we were on it. My grandad called me afterwards and said he loved it all except the bit where we did a ‘lets all make as much noise as we can’ – as it was easy for anyone to do that. He wasn’t wrong. He knew how to do wevie better than me that man. He once taught a whole school of kids how to play every instrument in the orchestra; he wasn’t a music teacher, and he couldn’t play a single one of them himself. An inspiration. Their first concert was the first true wevie show.

ADMIRAL UMNEY: I think the Mixing It boys played one of our tracks and made the mistake of saying ‘yes, one day perhaps we’ll get Wevie in to do us a session’ or some such. I remember the food was quite good, we drunk a lot and the producer holding his head in his hands.

TD: I’ve always thought you’d go down a storm scaring the hippy idiots at Glasto. Has anyone booked you for festivals this year? If not why not?

MR VAST: our one and only glasto gig at the glade was a real hoot, we got some nice fan mail later people said we were the best show they saw. so yeah – festivals are our element – see the photo´s on our Cack site, (from last years Fusion festival ) for evidence .

AL: I didn’t like glastonbury. I think we should move more towards playing village fetes , the Nasa AGM and private concerts for wealthy foreign dictators.

ADMIRAL UMNEY: We did the Glade in 2004 I think and it went down a storm and we all got wet. This year we’ve had no takers though I wrote to over 200 festivals at the end of last year? Bloody shame. We don’t have a gig agent so it’s all down to our incompetent attempts to drum up interest or people contacting us through our site, which happens less and less. Like I said, shame coz we are ready to go at a drop of a hat. 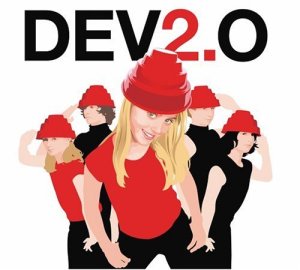 TD: In a recent interview, Carl Craig talks about teaching his kids how to do techno, to further the family business – Carl Craig and Sons. Does Wevie have plans to do something similar? Like the (frankly creepy) Devo 2.0?

MR VAST: Half of us have sprogs on the go already, so theoretically its a possibility. (bagsy being stavros)

AL: It is already under way. My wevie jnr has already recorded her parts for the next album – an expert cartoon sound fx percussionist, casio sk5 player and ukelele twanger at 20 months.
I've tried to explain to her about the curse, but there is a fire deep within.

ADMIRAL UMNEY: I can't see us not being up for doing Wevie so as the kids grow maybe they'll just join in and swell our ranks?

TD: I spend quite a lot of time looking at old rave clips from 1990 on Youtube. What really stands out is people had a lot more hair, blokes with bobs everywhere. In the comments, you always see 18 year olds saying ‘i wish i was around back then’ which is quite sad. Was it really better in the old days?

THE VICE PRESIDENT: the future days were better i think after all.

MR VAST: I intend to rerave on the new vast album- will dedicate the track to the techno dads if you like?!

AL: The idea of it all was better than the reality. There are some choice moments in hair and music, but I think they mostly need some swift and precise editing to stand the test of time. The same will undoubtedly be true of the vast album.

ADMIRAL UMNEY: i wish i was around back then

TD: Kids today, what do you reckon?

THE VICE PRESIDENT: i prefer chicken.

MR VAST: Once they can turn the album over without supervision parenting is a doddle.

AL: Our perfect audience. the under 5’s mainly.