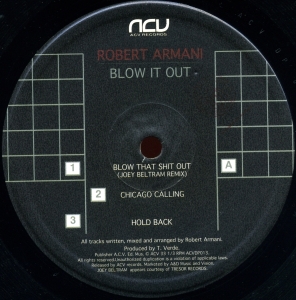 Since it’s Friday I thought I’d share a couple of massive bangers.

First up, a tune from Robert Armani’s 1995 album that has a special place in my ageing heart, as it was the first record I played in my first ever public DJ set, which happened to be at the Sub Club, back in the days when they used to hire it out for private functions. It’s quite effective for that purpose, starting as it does with a silly siren noise to announce one’s presence, and then a big fuckoff 909 snare roll – but it’s really all about the monster riff that comes in at around 1.40. In these days of digital DJing I can now loop that bit as well cos it doesn’t go on long enough. The album is also notable for including a hard as nails Joey Beltram remix, done when he was in his golden phase ie around the time of his genius Places album on Tresor.

Robert Armani had a very distinctive sound, each tune quite simple and raw based around a big riff or two – but with a massive production that would knock your block off through a sound system. Of course, he is best known for the epic Hardfloor remix of his tune Circus Bells.