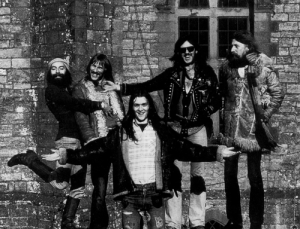 Dancing to Hawkwind can be especially embarrassing. It’s the kind of dad dancing you might do at 5am with headphones turned up very loud after everyone has gone to bed. For a lot of techno dads that’s the only kind of dancing.

This is the best 10 minutes of the BBC Four Hawkwind doc from a couple of years back. Lemmy’s stories are classic, especially the one about being left in a service station and having to hitch across the state of Michigan in the middle of the night while tripping. Hawkwind really did pioneer the whole sensory overload thing. It had been done before by Floyd but they took it to another level, and there was a darkness to Hawkwind largely absent from other hippy shite thanks to Lemmy’s speed freak influence.

Here’s my own personal favourite Hawkwind jam, it’s Master Of The Universe from Space Ritual…Do a little dance if you like.